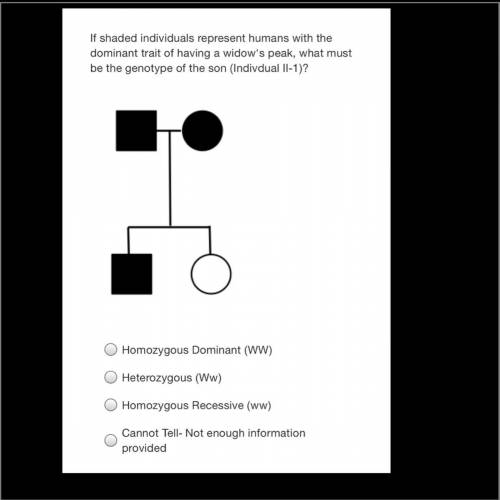 Explanation: We know for certain the son is NOT ww because the son has the dominant trait for the widow's peak. Both the parents are Ww because their daughter lacks a widow's peak, which means they both must carry the recessive gene. If we conduct a Punnett Square with the parents genotypes which are both Ww, the son has a 25% chance to be WW, and a 50% to be Ww and a 25% chance to be ww (which he is not since he has a widow peak!). The son could be WW or Ww. In order to find out which genotype the son has, we'd have to look as his offspring!

I hope this helps!!

Answer from: Quest
Wikipedia aswell can be used to solve the following questions

the growth of the plants is affected by the heat of the light. what is the student doing?

Biology, 21.06.2019 19:00
For each of the following, decide whether the statement describes photosynthesis, cellular respiration, or both. releases energy in the form of atp. stores energy in glucose molecules. performed by producers. performed by consumers.
Answers: 1
Answer

Biology, 21.06.2019 21:00
Ausable water source is one that can be used by humans for drinking or agriculture. identify the water reservoirs as usable or unusable based on their current state. oceans rivers glaciers freshwater lakes groundwater
Answers: 3
Answer

Biology, 21.01.2021 19:50
what are some things that might happen to light when it hits different material on its way through earth atmosphere.​...

History, 21.01.2021 19:50
Which of the following most accurately depicts the federal government's attitudes to Civil Rights during the Great Depression of the 1930s? O There w...

Mathematics, 21.01.2021 19:50
Determine and state the determine the minimum length of a ladder, to the nearest tenth of a meter, that David will need to buy for his treehouse...

English, 21.01.2021 19:50
Story 1 An Interesting Day Mark and Danny were exploring the caves in the blue-ridge mountains of Shenandoah with their dad Frank. After walkin...

History, 21.01.2021 19:50
im what ways could a former slave make more persuasive messenger for abolition than a person who was never enslaved?​...