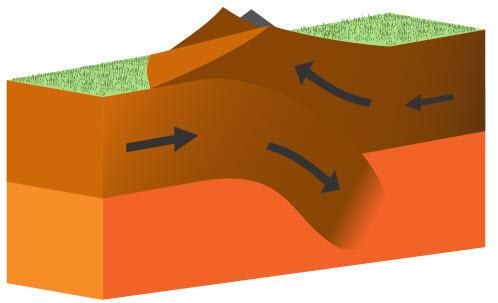 1 A convergent boundary is formed.

Let's check the options one by one:

1 A convergent boundary is formed.

- From the picture, we can see that both the left and right plate are continental plate, given there is no signs indicating that they were under ocean and both have grass on top. As mentioned above, two plates are colliding. As it satisfies both plates being continental plates and that they are colliding, the option is correct.

Divergent boundary is where two plates move apart and as from above this is not the case, given how the arrows are pointing towards each other we can see that they are moving together instead of moving apart.

4 Continental plates are sliding past each other.

"Sliding past" means that the plates are sliding across each other in however not colliding. No plate material will be created or destroyed in the process and from the picture we can see that this is not the case.

As mentioned above, the two plates are continental plate that are colliding, however in the mid-oceanic ridges in above statement can only be formed by diverging oceanic plates undersea. As both feature cannot be satisfied, this statement is false.

Explanation: A convergent boundary is formed.  Continental plates are colliding.

Answer from: Quest
Ihere is the definition of do u want ut

Another question on Geography

Geography, 24.06.2019 09:00
Why did i write that there’s one world ocean? what about the pacific and atlantic oceans, the “seven seas”?
Answers: 3
Answer
You know the right answer?
Study the image. which feature is modeled in the diagram? check all that apply. 1 a convergent boun...
Questions

Business, 05.03.2020 04:20
When compared with traditional contract law, the Uniform Commercial Code (UCC): A. is more likely to find that parties have a contract. B. reflects a...

Business, 05.03.2020 04:20
Chelsea Milling Company makes Jiffy packaged baking mixes. It was established in 1930. It has never spent one cent on advertising, which is one reason...

History, 05.03.2020 04:20
At the start of World War I, Palestine was controlled by Great Britain France the League of Nations the Ottoman Empire...

Biology, 05.03.2020 04:20
The domestic dog, Canis lupus familiaris, has 39 pairs of chromosomes in each of its diploid somatic (body) cells. Therefore, the haploid sperm cells...

Computers and Technology, 05.03.2020 04:21
This is not covered on the CCE exam but it is important in the field of computer forensics). Research the problem of performing a forensic investigati...

Computers and Technology, 05.03.2020 04:21
A website that sells high-end ties notices that its ads are showing up for searches that include "cheap". Because its ties are expensive, it does not...

Business, 05.03.2020 04:21
An externality arises when a firm or person engages in an activity that affects the well-being of a third party, yet neither pays nor receives any com...

Geography, 05.03.2020 04:23
Australia is located in the middle of a tectonic plate. This MOST LIKELY results in A) few earthquakes. b)many earthquakes. C

Computers and Technology, 05.03.2020 04:23
Selea the correct tent in the passage What are some inadvertent effects of technology? Technological innovation - A Boon or Bane Tec...
More questions: Geography Another questions
Questions on the website: 11029548