The greenhouse effect is a natural phenomenon that occurs on Earth, it is a process that results from the capacity of the atmosphere to absorb and emit the different heat fluxes received from solar radiation.

This process begins with the arrival of radiation from the Sun to the Earth's surface, where most of the energy is received as ultraviolet radiation. Of this energy, part is absorbed by the atmosphere (ultraviolet radiation), another part is reflected by clouds, and another reaches the planet's surface (as visible light) by heating it. Once this radiation has reached and warmed the Earth's surface, the Earth returns this energy in the form of infrared radiation (thermal energy) and is reflected and sent back to the atmosphere and space.

It should be noted that thanks to this process the temperature of the planet is compatible with life as we know it. However, pollution activities due to the fossil burning fuels and deforestation by humans have intensified the effects of this phenomenon, being the main cause of global warming. 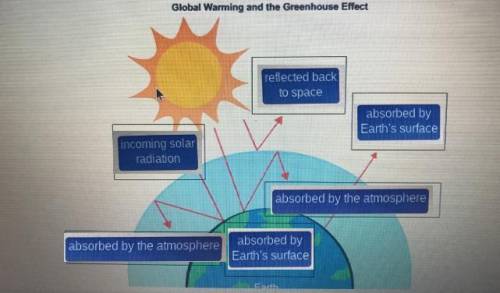 If the amount of an absorber such as carbon dioxide increases, more radiation is absorbed by the Earth's atmosphere. The atmosphere radiates heat back to the surface. This is sometimes called the greenhouse effect (as the glass in the greenhouse allows sunlight to enter and blocks the escape of infrared radiation).

This is caused when solar radiation reaches Earth- some of the energy is absorbed by the land and water while the rest of the energy is reflected back into space. Now the absorbed heat radiate from earths surface is trapped by the greenhouse gases in the atmosphere which causes the warming of the Earth. But due to the increase in greenhouse gases extra heat is absorbed  which leads to Global warming.

Thus, marked options in the box are correct. 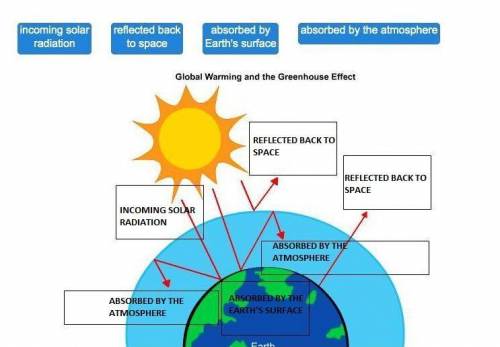 Another question on Geography

Geography, 23.06.2019 07:30
Which of these has the least impact on the climate of a place
Answers: 2
Answer
You know the right answer?
Identify what happens to light in this model of the greenhouse effect...
Questions

Mathematics, 30.04.2021 18:20
Augusto wants to prove to his parents that watching TV while he does his homework will help him get better grades. He decides to ask 20 of his friends...

Chemistry, 30.04.2021 18:20
A rock has been formed by the accumulation of bits of minerals and soll that are pressurized together. How should this rock be classified?

History, 30.04.2021 18:20
Why did Odysseus leave his family in the first place? He didn't like his wife anymore and wanted to get away from her He really wanted a daugh...