What were the causes and effects of the war in 1812 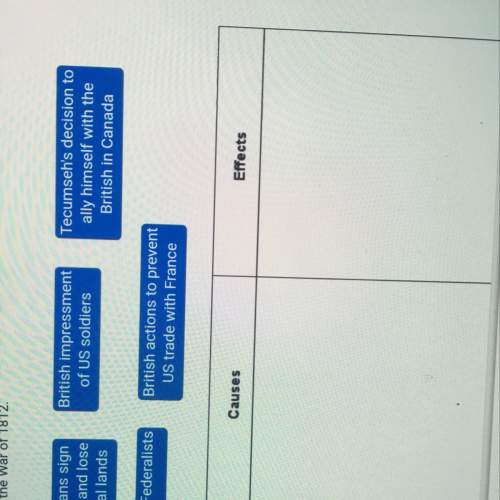 Answer from: neemy
The british actions to prevent trade with U.s and france

Causes of the War of 1812. ... Great Britain had violated American sovereignty by refusing to surrender western forts as promised in the Treaty of Paris after the Revolutionary War. 2.) Great Britain began stopping American sea vessels and forcing subjects on the vessels into the British military.

Answer from: isabelcrosabal
Causes:
-- American merchants resented British barriers of trade with France.
-- Americans angered by impressment.
-- Americans believe the British pushed Native Americans to fight with American settlers.
-- Some members of the House of Reps wanted to expand into Canada.

Effects:
-- American patriotism was boosted.
-- Native Americans were weakened.
-- Loss of trade encouraged American manufacturing.
-- United States proved that it could defend itself.
Hope i helped

Answer from: xXwolfieplayzXx
Causes: british impressment of US soldiers and british action to prevent US trade with France

effects: Am. indians sign peace treaties and decline of federalist

Answer from: bibi43232
The war of 1912 was a dramatic boost to the manufacture of the united states . British of America coast created cotton cloth leading to the creation of a cotton-manufacturing

Answer from: alyssabond5219
They did not let Cubans get out of Cuba because of the spies

History, 22.06.2019 00:00
What amendment limits the government's power to take away individual liberties -first -second -ninth -all of the above
Answers: 2
Answer
You know the right answer?
What were the causes and effects of the war in 1812
...
Questions

Engineering, 28.01.2021 22:50
g . For a given flow rate through a smooth pipe, when comparing laminar and turbulent flow... (a) laminar flow will yield larger velocity gradients at...

History, 28.01.2021 22:50
Identify one continuity in Japan from the Tokugawa Shogunate into the Meiji Restoration​...

Mathematics, 28.01.2021 22:50
Bella has a cell phone plan in which she pays of each call minute and text message she sends. The total number of minutes used and text messages sent...

Physics, 28.01.2021 22:50
Particulate Motion Unit Test Part 2 1. A gas leak where methane gas combines with oxygen in the air can start a fire, releasing its energy at ignitio...

Geography, 28.01.2021 22:50
Which factor of production came as a direct result of the territorial expansion illustrated in this map? A New resources B. New tec...

History, 28.01.2021 22:50
WILL GIVE BRAINLIST!! 1.Which of the following launched Andrew Jackson as a national figure? A. Battle of New Orleans B. Monroe Doctrine