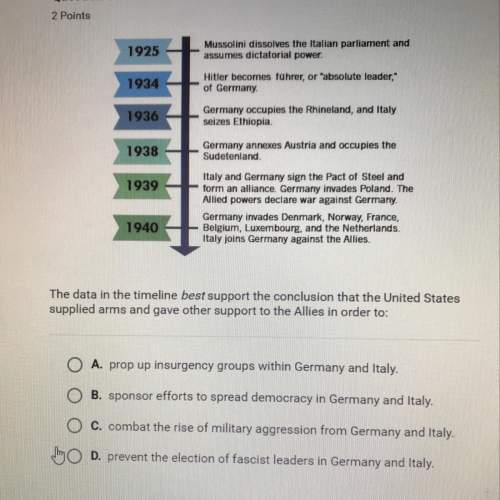 Over the timeline, we see Italy and Germany gradually expanding and imposing their rule over various areas after Hitler takes office as the fuhrer. Germany at that time had great military power, and along with Italy, the two were significantly powerful. Through this we can deduce that the US then supported the Allies by supplying them with arms after they had declared war against Germany in 1939 in hopes that the Allies would be able to defeat them.

History, 21.06.2019 15:30
What country was south vietnam resist a communist takeover before the united states stepped in? a. germany b. france c. britain d. japan
Answers: 1
Answer

History, 21.06.2019 16:00
What happened after tunstall was murdered? how did billy the kid react to theviolence?
Answers: 3
Answer

History, 21.06.2019 18:30
During world war ii who is the commander-in-chief of the pacific fleet
Answers: 2
Answer
You know the right answer?
The data in the timeline best support the conclusion that the united states supplied arms and gave o...
Questions

Geography, 04.08.2019 07:40
The term "global warming" refers to a. the warming of regions of the earth during the summer b. increased average temperatures on the earth's surface...

Computers and Technology, 04.08.2019 07:40
Every computer on the internet must have a unique address, expressed as an ip address id address binary number bit address the answer is a. ip addres...

Mathematics, 04.08.2019 07:40
While driving from his home to his workplace, chris has to pass through two traffic lights. the general pobability of getting a red signal at the firs...

Biology, 04.08.2019 07:40
Explain the characteristics scientists use when observing organisms and placing them in the six kingdoms ....

Spanish, 04.08.2019 07:40
Iam supposed to translate the english sentences below into spanish. i think i am correct in my translation (hopefully), but i can't figure out how to...

History, 04.08.2019 07:40
New york and buenos aires. what makes these cities stand apart from each other culturally? what is unique about each city’s attitude, language, habit...