How did turkey change as a result of world war i? 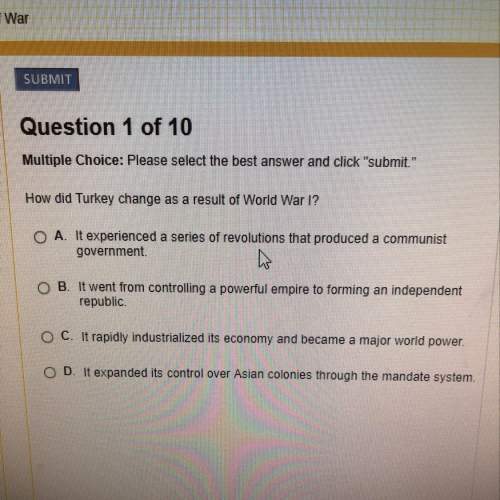 I believe the answer is A, World War 1 was the main cause of the ottoman empire to break up, and that caused political unrest. But please check on some history websites to make sure it's correct :)

Answer from: 25linm
-It went from controlling a powerful empire to forming an independent republic- Apex.

Back then in 1914 The Ottoman Empire entered the First World War due to the alliances with the Central Powers.

The end of WWI by 1919 meant the Turkish War of Independence which lasted from 1919 to 1923.  Furthermore, the French together with the British authorities had made a pact to share the Ottoman Empire domain by fostering revolts between the Ottoman Arabs and their Turkish government.

These two factors caused the disintegration of this vast empire and the formation of the Turkish Republic.

It went from controlling a powerful empire to forming an independent republic. (APEX 2018)

Answer from: smithsa10630
It went from controlling a powerful empire to forming an independent republic :)

History, 21.06.2019 18:50
How did critics view the judicial reform bill under roosevelt? they thought that it would weaken the presidency and strengthen the court. they felt that it was an attempt to gain influence on the supreme court. they viewed it as a way to take power away from the government and give it to the people. they thought that it would bring an end to the programs created by the new deal.
Answers: 1
Answer

History, 22.06.2019 05:30
Narrative writing account of the boston masquerade from the point of view of a british soldier involvement in the event
Answers: 2
Answer

History, 22.06.2019 09:00
1)which is the following was characteristic of the british colonies but not the french or spanish religion a. presence of slavery b. religion conversion c. smuggling and piracy d. strict racial hierarchy 2)how did the columbia exchange affect europe? a diseases from the new world decimated the population of the european continent b new crops introduced to europe generated further interest in the new world c enslavement of american indians in europe changed cultural attitudes toward slavery d the items produced by american indians become objects of competition in europe
Answers: 3
Answer
You know the right answer?
How did turkey change as a result of world war i?
...
Questions

Biology, 04.02.2020 16:59
During early developement all cells in the embryos of a multicellular organism are identical. later in developement the cells become specialized throu...

Social Studies, 04.02.2020 16:59
Which of these countries likely has the least amount of oil resources? jordan iran kuwait saudi arabia...