How many triangles in the diagram can be mapped to one another by similarity transformation? 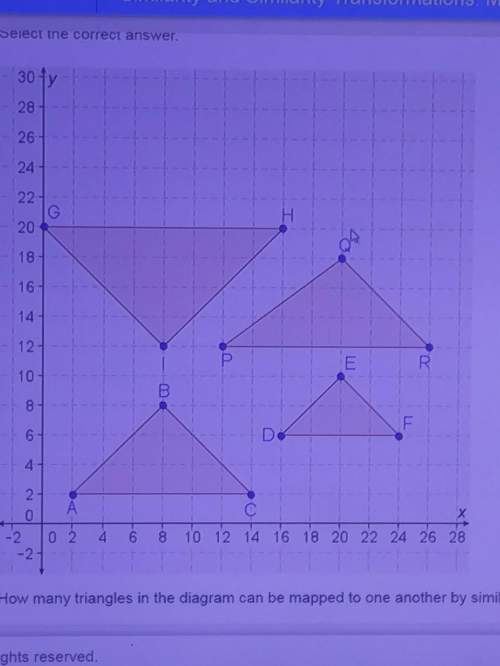 Step-by-step explanation: We are given four triangles on the coordinate plane and we to check which can be mapped to one another by similarity transformation.

We can see that triangles ABC, DEF and GHI are isosceles but ΔPQR is not isosceles, so it cannot be similar to the others.

Therefore, ΔABC, ΔDEF and ΔGHI are similar to one another.

Answer from: campbellcameca
4 because it is multiple by 89 billion

I think your answer is 0.But not sure through.

I HOPE THIS HELPS IF NOT THEN SORRY.

Answer from: datstepparoddoe27
The answer is B. 4

Answer from: lLavenderl
The answer is b.4 :)

Mathematics, 21.06.2019 16:00
Enter the number of complex zeros for the polynomial function in the box. f(x) = x+ + 5x² +6
Answers: 2
Answer
You know the right answer?
How many triangles in the diagram can be mapped to one another by similarity transformation?
...
Questions

Biology, 13.11.2020 16:50
Drag each label to the correct rock. Obsidian and granite are igneous rocks that were formed by volcanic activity. Study the two rocks and, based on t...

Chemistry, 13.11.2020 16:50
C6H5CO2CH2C6H5 can be synthesized by an SN2 reaction. Draw the structures of the alkyl chloride and nucleophile that will give this compound in highes...

Mathematics, 13.11.2020 16:50
Pedro and Maria each opened savings accounts on the same day, intending to withdraw the money for weekly expenses. Pedro opened his account with $750...