Which of the following groups of sentences most accurately describes the cuban missile crisis? 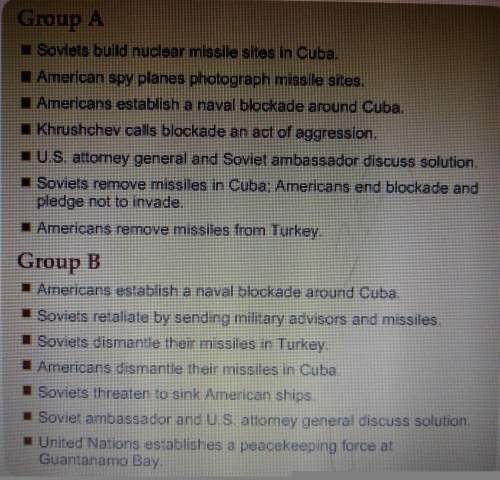 Answer from: paris4ever23
Group A The Cubans and Soviet union did not like the u.s to much. and were on the edge of nuclear war but they later came to a conclusion. United states would take missiles out of Cuba and the Soviet union would do the same for cuba.

The group of sentences that most accurately describes the Cuban Missile Crisis is Group A.

Cuban Missile Crisis was a 13-day confrontation (October 16-28, 1962) between the United States and the Soviet Union related to the deployment of Soviet ballistic missiles in Cuba. In addition to being televised worldwide, it was the closest to the beginning of a large-scale nuclear war during the Cold War.

In response to the failed Bay of Pigs invasion of 1961 and the presence of US-based PGM-19 Jupiter ballistic missiles stationed in Italy and Turkey, Soviet leader Nikita Khrushchev decided to agree with Cuba's request to place nuclear missiles on its territory to deter a future US invasion. An agreement was reached during a secret meeting between Khrushchev and Fidel Castro in July and construction of a series of missile launch facilities began after summer.

An election was underway in the United States. The White House denied accusations that it was ignoring Soviet missiles 145 kilometers off the coast of Florida. These missile preparations were confirmed when a US Air Force Lockheed U-2 spy plane produced clear photographic evidence of R-12 Dvina and R-14 Chusovaya ballistic missile installations. The United States established a military blockade to prevent new missiles from entering Cuba, and announced that it would not allow offensive weapons to be delivered to Cuba, demanding that the already delivered weapons be dismantled and returned to the USSR.

After a long period of tense negotiations, an agreement was reached between Kennedy and Khrushchev. Publicly, the Soviets dismantled their weapons in Cuba and took them to the Soviet Union, subject to United Nations verification, in exchange for a US public statement never to invade Cuba without direct provocation. Secretly, the United States also agreed that it would dismantle the entire Jupiter missile network that was deployed in Turkey and Italy against the Soviet Union, but was not known to the public. On November 20, 1962, when all Ilyushin Il-28 offensive missiles and light bombers were removed from Cuba, the blockade was formally ended. Negotiations between the United States and the Soviet Union underscored the need for a quick, clear and direct line. between Washington DC and Moscow. A series of agreements drastically reduced US-Soviet tensions over the following years.

Answer from: gallla
On October 14, 1962, a spy plane flying over Cuba and found Nuclear missile sites under construction. 8 days later Kennedy sent a Naval Blockade . On October 28 Soviet announced that they were removing the missiles.

History, 21.06.2019 19:00
Which of the following was a characteristic of government proposed by the new jersey plan? it denied congress the ability to levy taxes. it based representation on population rather than keeping states equal regardless of size. it denied congress the ability to regulate trade. it preserved an executive committee rather than adopting a singular president.
Answers: 1
Answer

History, 21.06.2019 19:00
Which statement would best conclude an evaluation of dan deluca's argument in "dylan's nobel prize settles debate: rock lyrics are poetry"? deluca shows an impressive knowledge of the entire range of dylan's creative output. overall, deluca's wide-ranging evidence will prove that rock lyrics are indeed poetry. i find the examples of internal rhyme to be the most convincing evidence deluca offers. deluca calls on novelists and a us president for their opinions of the nobel committee's decision.
Answers: 3
Answer

History, 22.06.2019 01:00
What does the document of the birtish octopus is an uderlying cause of the world war 1
Answers: 2
Answer
You know the right answer?
Which of the following groups of sentences most accurately describes the cuban missile crisis?
...
Questions

History, 24.08.2019 06:20
How did the commercial revolution motivate european explorers during the age of exploration?...

English, 24.08.2019 06:20
Identify the participial phrase in the sentence below. the big room, having enormous dimensions, is the largest underground chamber in north america....