Sounds like your describing complementary angles (a pair of angles that add up to be 90 degrees) but not super sure based on that description you have there. 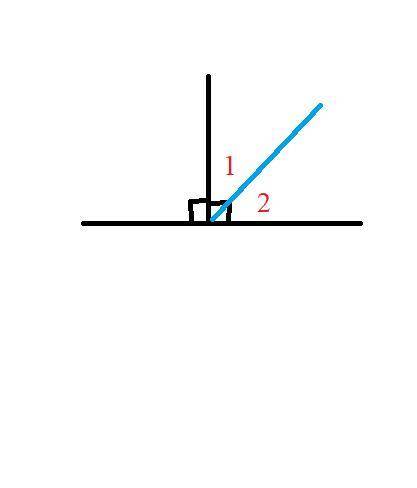 Answer from: angeldaughter0620
1 and 2 are supplementary angles. The sum of their measures is equal to 180 degrees.

You need to remember that:

1. Complementary angles are defined as those angles whose sum is 90 degrees.

2. Adjacent angles are those angles that have a common side and a common vertex.

3. Vertical angles are defined as those angles that are opposite to each other and share the same vertex.

4. Supplementary angles are defined as those angles whose sum is 180 degrees.

In this case you can notice that the angle formed  by the intersection of of the vertical line and the horizontal line measure 90 degrees. Therefore, if you add the angle 1 and the angle 2, you will get 90 degrees.

Based on the above you can conclue that the angles 1 and 2 are Complementary angles.

The answer is (A) complementary angles.

Step-by-step explanation:  We are given a figure involving angles 1 and 2 and we are to select the correct relation between these two angles.

We know that, if the sum of two angles is 90°, then they are said to be complementary angles.

Then those two match.

Then those two match

vertical bc of the diagonal secondly supplementary bc equal to 180

and last bc its not touching

Angles 1 and 2 are Complementary angles

Two Angles are Complementary when they add up to 90 degrees (a Right Angle).

∠1 and ∠2 form a right angle and are complementary, that is they sum to 90°

Mathematics, 21.06.2019 18:00
Write an equation for the function that includes the points (1,4/5) and (2,2/3)
Answers: 1
Answer
You know the right answer?
Which relationship describes angles 1 and 2? select each correct answer. complementary angles suppl...
Questions

Mathematics, 03.12.2020 04:40
Subject : Pythagorean Theorem For each question, solve for the length of the unknown side, as denoted by the variable. You may round your answers to...

History, 03.12.2020 04:40
In Germany, the head of government- the Chancellor- serves a four year term, and takes office upon winning a majority of the vote in the Federal Parl...

Biology, 03.12.2020 04:40
A. Does the presence of mtDNA support or reject the traditional view of the origin of mitochondria? Explain. WILL MARK AS BRAINLYIST!❤️❤️...

History, 03.12.2020 04:40
In your opinion, which change voting rights, the economy, or indian removal still influences Americand the most today? Write a short paragraph explain...

Health, 03.12.2020 04:40
HELPP Zuri's friends asked her to do something she did not think was right. She wanted to impress her friends so she did it anyway. Zuri is feeling th...